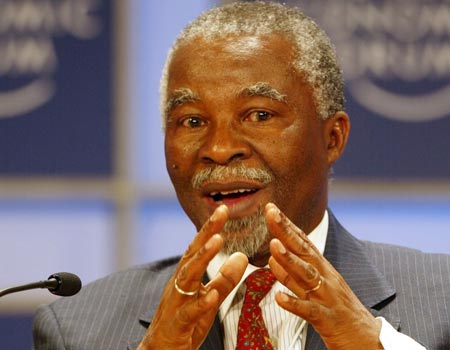 Sunday, June 18, 2022 brought to life a delightful edition of my series, The Toyin Falola Interviews, where we had former South African President Dr. Thabo Mbeki as our guest. If anyone had thought of my piece before the interview as overly complimentary, this interview, with all its intensity, was resounding and conclusive proof of the integrity of the piece.

Having President Mbeki on the show has been a privilege as he clearly represents a generation of South African nationals and politicians who are gradually making history while belonging to the next generation. He belongs to the generation that saw the anti-apartheid campaigns and activism and also to the generation of the embryonic wave of post-apartheid governance in the country. And he is still with us today. Listen to Mbeki, a feature of anti-apartheid-era politics and activism that everyone would appreciate – especially since it is lacking in the current generation of young African politicians – is a political ideology. The African National Congress that Mbeki grew up was guided by its political ideologies, which formed the foundation of the party, its campaigns and activism, recruitment processes, membership and structure. The likes of young Thabo grew up learning the ideologies of the party and thus forming a strong sense of identity.

The party leadership and other intellectual parents like Mbeki’s knew that the battle being waged was not only against apartheid as a political infrastructure but also as a social system. In a South Africa where it was easy for young people and adults to lose their identity and sense of self, Mbeki grew up a proud and vocal African, which is largely thanks to the upbringing he received. it was exhibited during his formative and youthful years.

Credit must be given to Mbeki’s parents, who provided him with an environment and upbringing that exposed him to the finest and finest forms of engagement that any growing young African could dream of. According to the president, he grew up in an environment where he had ample opportunity to engage with issues, ideas and people. If nothing else, such an opportunity during his formative years must have gone a long way in shaping the vocal and relentless political and intellectual bulwark that is President Mbeki.

It cannot be said that such importance is given to ideological values ​​in today’s South Africa. Then it was apparently a do-or-die deal. Activists either had to groom children who had a firm and grounded sense of who they were as Africans or risk losing the battle to the eroding socio-political system of apartheid. Today, things have moved from a level of survival to a need to thrive, and can we say with certainty that the political scene in South Africa is thriving as a resolutely ideological scene?

The dearth of ideological politics is not a South African political epidemic. It exists in other African countries, including Africa’s self-proclaimed giant, Nigeria. However, the level of severity differs from country to country. South Africa: Having experienced ideological politics for an extended period does not have such a severe case as Nigeria. That is to say, the current political overlords in South Africa still claim their political commitments and activities under the guise of a mutually shared political ideology, especially since the African National Congress is still the ruling party in the country. The same cannot be said of Nigeria, where political activities are devoid of any iota or trace of political ideologies. Politicians are defecting to the country’s two main political parties as they wish. In Nigeria, your strategic alignment with the ruling party or the predicted party in power is all that matters, whether or not you are chosen as your party’s flag bearer for the political position you are aiming for.

Although the realities of education for Mbeki and those of the current generation of South Africans are starkly different, there are underlying issues that show that both have similar issues to address. President Mbeki’s generation was at the forefront of the struggle to end the apartheid system. They were also the vanguards of a new development-oriented democracy for the people of South Africa. They were the first to do it without a manual or a “how-to guide” to follow. Embryonic post-apartheid South Africa needed more than physical development. Building the South African state required emotional and psychological inputs. People needed to know themselves and their value and recognize it.

President Mbeki recounted the processes that led his generation to get involved in politics. There was no formal transfer of power from his father’s generation to his. Power changed hands because the youth of the time – Thabo Mbeki’s generation – recognized the need to actively participate and contribute to political activities and engagements in their country. Mbeki has been an active member of the African National Congress since he was a teenager. And the same can be said for some other notable anti-apartheid political activists of his generation. He recalled how, through his active participation in party engagements, party leaders identified him and deliberately delegated certain leadership roles to him – first, to test his knowledge of the ideological underpinnings of political engagements and activism. of the party, and second, to test how solid Mbeki was a member and how prepared he was for leadership positions. This is how he found himself in good circles, eventually becoming the National President of the African National Congress and eventually the 2nd President of post-apartheid South Africa.

Just as the young Mbeki and his energized young people did not wait for an official transfer of power from the older generation to their generation to take initiatives, participate in political speeches and engage politically, today’s youth do not should not expect the former rulers to step down or cede power to them or relinquish their seats of power. There is hardly anyone, once in possession of the power, who would be happy to let it go freely. Today’s youth must learn the art of political engagement. In addition, they must understand that political influence and the holding of influential and important political positions come from active engagement and participation in political life. It is the young people who show themselves capable of handling power who will eventually inherit it. The long-term level of intellectual and mission-oriented political engagement cannot be separated from the circumstances surrounding the upbringing of two generations of South Africans.

Assigning a leadership scorecard to Heads of State and Government of African countries would reveal one thing: many political leaders across the continent cannot measure even the bare minimum of what is expected of them. . The situation is terrible, and the carelessness of these leaders in the face of their incompetence is more than terrible!

African political leaders must know that they have a duty to be accountable and transparent with those they govern. Leadership in a democratic state should be nothing less than representation. The people voted for their leaders, and in turn, those leaders are required to communicate with the people in real time about the issues affecting the state and the approaches the government is taking to address them. Naturally, some promises may encounter delays in their execution. However, not seeing the electorate as important enough to be kept up to date with promises and projects being carried out is the problem facing many African political leaders. Leaders must maintain regular contact with the people and communicate honestly with the electorate. Thus, the population will be better able to measure its expectations vis-à-vis the achievements and measures taken by the leaders.

South African youth today need to know that power and leadership are not handed out on a platter of gratuitous gold. There will be no formal handover of power from President Mbeki’s generation to today’s youth. And no one would actively seek to prepare young people for power if they themselves are not prepared for power. South African youth must learn to participate, to engage with issues and people, to form alliances, to belong, to network, to learn, to prepare themselves in the process and to position themselves strategically for leadership positions. direction. Fortunately, political participation in South Africa – although not always encouraging – is not as financially costly as in Nigeria. Lamentation must give way to activism.