HOUSTON: The excitement of the counselors is palpable in the air as they work vigorously to prepare arts and crafts supplies for camp. Another group of counselors sit in the corner with the directors practicing their educations and making sure everything is perfect for their campers. That hustle and bustle happens every Sunday at Keshav Smruti in Houston, Texas, as counselors organize everything down to the smallest detail for the 210 campers expected this year. 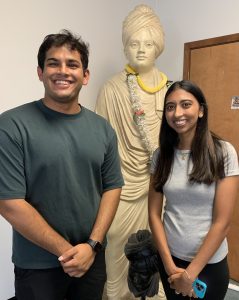 Each counselor realizes the importance of the Hindu camp and the role it plays in the lives of campers – strengthening religious and cultural bonds. Thus, preparations for the “five best days of the year” are in full swing.

The Hindu Heritage Youth Camp (HHYC), founded in 1984, has aimed to “inspire the younger generation by teaching them the rich values ​​and ideas of their heritage” for 38 years now. Children from the greater Houston area come together to discuss India’s rich history, learn age-old Hindu traditions like yoga, and bond with each other while playing games like ‘stealing the butter “. Lasting friendships are born from these five days and many campers continue to serve the community that once served them by becoming counsellors, coordinators and directors. They passed on the knowledge and wisdom they once received to the next generation of campers.

The five-day camp in Medina, Texas is packed with activities that appeal to every age group. This year we have over 60 students and recent graduates who have worked tirelessly to organize daily games, trainings and arts and crafts for the events that happen every day. Without the hard work of our instructors, the camp would not be possible. Sara Joshi, a 5e counselor of the year, explains that “I met some of my best friends at the camp and learned to appreciate my Hindu heritage. I want to provide these campers with the same crucial experience that HHYC had for me because camp is where I learned to be proud of my culture and my roots.

The camp will be led by Ranjan Veludandi and Shivangi Dixit this year. Ranjan is a recent graduate of the University of Texas at Austin, and this is his second year as a director. Ranjan explains that this year of meetings has been quite different. “We have adopted a hybrid format of Sunday meetings. We started particularly early this year with Sunday Zoom meetings and will now meet in person for the finishing touches before camp. We learn to adapt to the new environment around us and are ready to meet any challenge that comes our way. I can’t wait to see everyone there!”

Shivangi Dixit is a recent graduate of Texas A&M University. She has been both an advisor and a coordinator in the past. This year will be his first year of production. Shivangi says she is extremely excited because “the counselors and coordinators have worked diligently to prepare phenomenal educational topics that will give campers insight into their cultural background. Hopefully campers will leave HHYC with new knowledge to share with family and friends. I’m counting the days until July 26e.

HHYC is only possible because of the hard work of our advisors and the support of its umbrella organizations, the Hindus of Greater Houston. Additionally, there are a host of volunteers helping out behind the scenes during camp – there is a camp doctor who looks after campers’ well-being, volunteers work in the kitchen preparing home-cooked meals, and sponsors to finance the various supplies. Going forward, HHYC looks forward to building its permanent home at the Texas Hindu Campsite.

This article was written by Dhwani Dawar. Dhwani graduated from UT Austin with a degree in Neuroscience and has been an advisor at HHYC for 6 years.