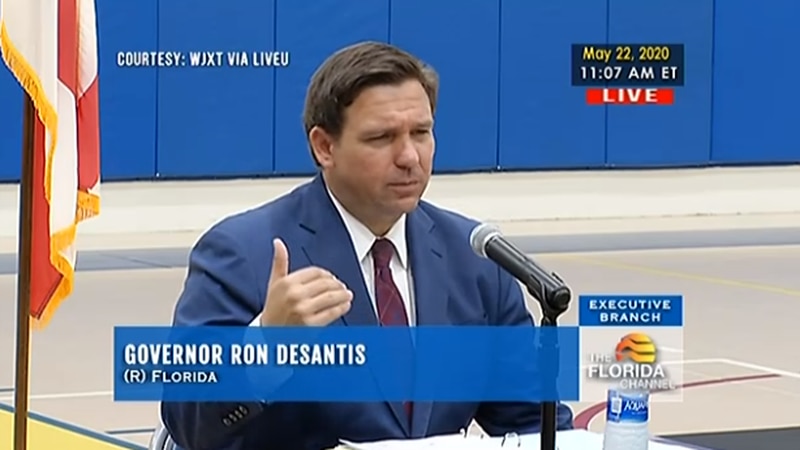 School may be out, but summer camp is back.

Gov. Ron DeSantis announced on Friday he was ending all restrictions on youth activities across the state, including camps and youth sports. The statement was the governor’s latest move to wake Florida from its coronavirus-induced economic slumber.

However, the Republican governor said he would not prevent municipalities from imposing more restrictive rules.

“We think this makes sense based on the data and observed experience. We’re not going to institute a lot of rules, or really no rules, ”DeSantis said, noting that the Florida Department of Health would likely post guidelines for youth activities on its website. “At the end of the day, we trust parents to be able to make decisions together with doctors. “

DeSantis’ announcement at a Jacksonville press conference matched the plans of some Tampa Bay area officials, but conflicted with others.

The Hillsborough County Department of Parks and Recreation last week canceled its series of summer camps.

Hillsborough Commission Chairman Les Miller Jr. said the county was awaiting official decree from the governor’s office before deciding on its next step. Miller said county officials would follow him. Pinellas officials said on Friday they have a similar plan.

Miller noted that it could be difficult for Hillsborough to open its camps with potential additional restrictions such as social distancing, limited group sizes or masks.

“We’re going to have to put a lot of things in place before we open the doors and say, ‘Come in’,” Miller said.

“We are continuing our summer school because people can’t go back to work if they don’t have care for their children,” Mayor Jane Castor said on a Facebook live stream from Cafe on Friday. Con Tampa. “And we found out and we are going to open our summer camps.”

Castor spokesperson Ashley Bauman said DeSantis’ announcement had little to do with the city’s plans to reopen summer camps, as the city views the camps as child care centers. This type of care has never been banned under the governor’s previous restrictions, Bauman said.

Later on Friday, Castor said in a statement that she would “wholeheartedly support” the governor’s decision to reopen youth sports, provided it is done safely.

St. Petersburg announced last week that its summer camps will run at a limited capacity.

A spokesperson for the YMCA of Suncoast and the YMCA of Metro Tampa said Friday afternoon organizations would wait for the full executive order to be released to comment.

Related: Tampa Bay summer camps: some canceled, others set to open with changes

DeSantis argued that youth activities – schools, in particular – were closed in the first place because, at the onset of the pandemic, it was believed that children would spread the disease to other more vulnerable populations.

But children have not been shown to be very effective spreaders of the disease, the governor argued on Friday.

“The data is pretty clear that, for some reason, children don’t seem to be infected at the same rate as other adults are infected,” DeSantis said.

DeSantis also noted that children are much less likely to face the serious consequences of the novel coronavirus. In Florida, five out of six coronavirus deaths have occurred in people 65 years of age and older. No one under the age of 25 has died from the disease, DeSantis noted.

Related: In Florida, 83% of coronavirus deaths are in people 65 and over

The federal Centers for Disease Control and Prevention noted that “relatively few“Children have suffered serious health consequences such as hospitalizations due to COVID-19.

However, experts say the question of how the coronavirus affects children is far from settled.

Dr Steven L. Zeichner, head of the division of pediatric infectious diseases at the University of Virginia, said it is true that children older than infants and younger than adolescents appear to be less severely affected by the coronavirus than adults. However, it is difficult to know what the likelihood of a child is infected as governments still have not tested enough populations.

“We don’t really know if children are more or less likely to acquire COVID-19,” Zeichner said, according to a issue file by SciLine, an independent non-profit organization that brings together expert advice on scientific issues. “If we don’t test everyone, we won’t find a lot of asymptomatic illnesses. “

Florida has stepped up its testing program in recent weeks. As of Friday, about 837,000 tests had been reported in Florida. In a state of about 21.5 million people, that figure means that at most about 4 percent of the population has been tested.

Doctors across the country have also seen dozens of cases of “pediatric multisystem inflammatory syndrome,” or MIS-C, a childhood illness associated with the coronavirus. This disease is as mysterious as it is frightening for parents: the Centers for Disease Control and Prevention recently advised there is a lot that we don’t know about the disease.

Dr Bonnie White, the DeSantis family pediatrician, sat next to the governor as he made his announcement. She said MIS-C is “extremely rare”.

White supported the governor’s assessment of the current scientific understanding of the coronavirus. She said many of her patients exhibited symptoms of anxiety and depression due to months of isolation brought on by the statewide closures.

“It’s time for our kids to get back to the new normal, and it’s time to allow kids to be safe kids,” White said.