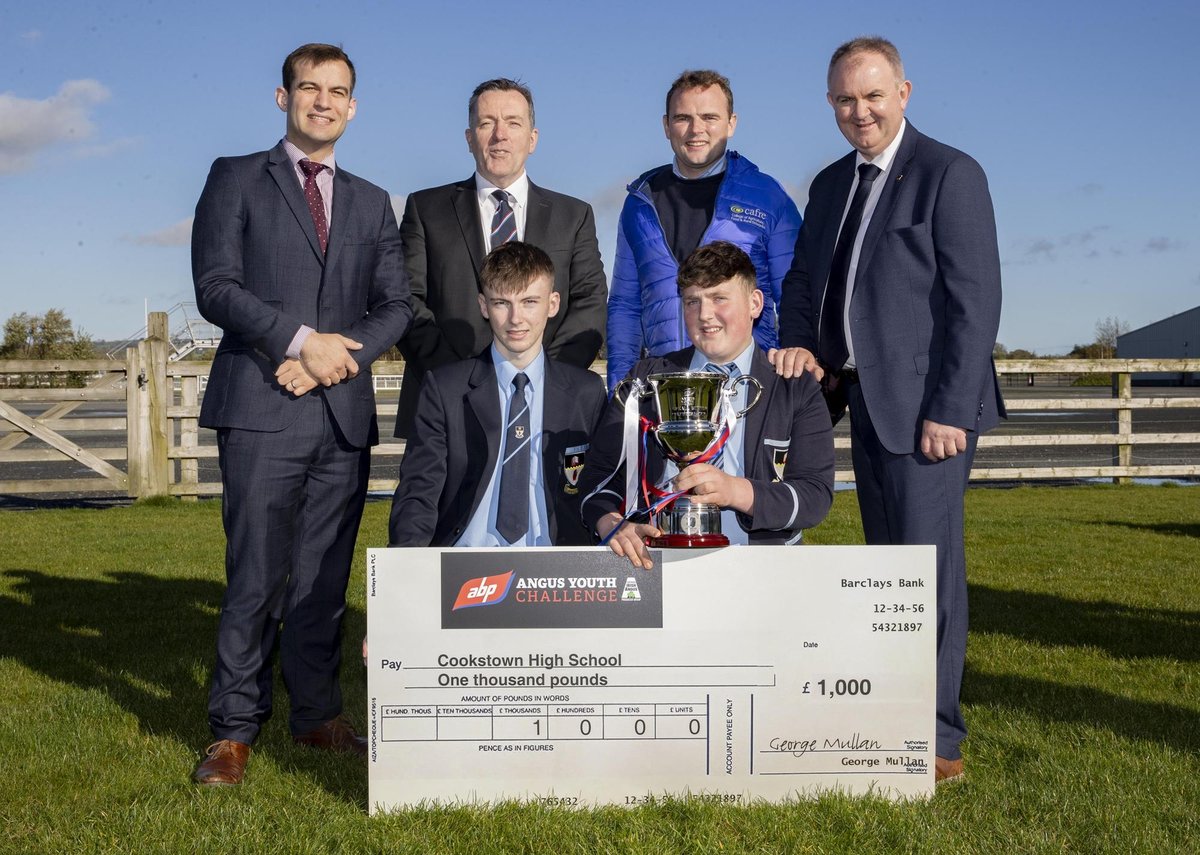 An example of this is the growing adoption of the GCSE qualification in agriculture, offered by Cookstown High School.

“We can accommodate a maximum of 20 students, engaging in Year 11 and Year 12 studies,” confirmed Robyn Stewart – who teaches the agriculture course at the school.

“And we’re currently maxed out in terms of the number of classes we can handle.”

She attributes the growing interest in studying agriculture to the school’s strong association with the ABP Angus Youth Challenge. It’s a journey that began for three forward-thinking students in the fall of 2020 and ended with the tremendous victory they achieved just a few weeks ago.

The winning team included: Ben Smyton, John-Mark McCrea and William Hamilton. In 2020, they were all year 11 pupils at Cookstown High School, all studying GCSE agriculture under the watchful tutelage of Robyn Stewart.

Their initial interest in the competition was sparked by conversations with Robyn, who was keenly aware of its success, its reach and the impact it had had on so many young students up to that point.

Speaking on behalf of the team, Ben echoes the story: “I’m from the town of Cookstown, but I love farming. John-Mark and William live quite close to town but have very good breeding experience.

“We all want a career in agriculture. In the case of John Mark and myself, we both want to become veterinarians.

“William decided to leave school after his GCSEs. He is now a student at CAFRE Loughry Campus.

He continued, “We quickly agreed to focus our first competition entry on the challenge of developing a sustainable agriculture industry.”

Ben, John-Mark and William believe passionately that a strong future awaits farming in Northern Ireland. According to them, for this to work, farmers will need to be financially secure in the future.

They also recognize the important role agriculture can play for the environment and communities around the world.

“Social sustainability is at the very heart of what agriculture should be,” Ben emphasized.

The first stage of the competition asked the Cookstown team to produce a three minute video presentation, reflecting the topics they were interested in and their knowledge of Angus cattle.

This was followed quite quickly by an interview with five judges which took place online due to Covid restrictions at the time.

The end result of this process was that Ben, John-Mark and William were told they had been shortlisted as finalists.

They received their Certified Irish Angus and ABP calves in June 2021 in an outdoor ceremony held at Balmoral Park.

“When the weaned babies arrived, they were on average four months old,” Ben confirmed.

“They were all four to five months old. The decision was made to place the cattle with John-Mark. However, we have all played our part in managing them.

“In my own case, I got a summer job at the McCrea farm.”

All team members are very pleased with the progress the animals have made over the past 17 months.

They were weighed regularly, with an average of 680 kg at the end of October.

“The cattle will be slaughtered in the next few days, so it will be interesting to know their final carcass weight.”

As part of their award for being finalists in the ABP Angus Youth Challenge, the Cookstown High team members receive the proceeds from the sale to ABP of their five cattle.

While Covid may have suspended some of the activities in 2021, Ben, John-Mark and William knew they would still have a final report to submit which should demonstrate priorities that can help deliver a sustainable future for agriculture .

Obviously, this would require a lot of research. But beyond that, the three members of the team wanted to involve all the students of the school as well as the entire community of the Cookstown area.

This is largely due to the use of social media with team members using these platforms to profile their management of their calves.

But face-to-face contact was also crucially important in this regard.

The Cookstown team invited local primary and secondary schools to learn about agriculture and beef production by seeing the five Aberdeen-Angus crossbred calves they were raising. Cattle were specifically displayed on school grounds for this purpose.

As part of this initiative, Ben, John-Mark and William were able to let visiting students feed the calves and ask questions about how they would be raised. The excitement and enthusiasm among the audience was such that most of them convinced their parents to bring them back after school was over.

This interest was reinforced by the whole Agriculture and Land Use GCSE class visiting the host farm for a follow-up farm walk.

Teacher, Robyn Stewart, commented: “These events fit well with the team’s research into social sustainability and confirmed their view that there was a deep-rooted heritage and love of agriculture. in their community.

“And that included people who don’t live on a farm themselves.”

This feeling of giving back to the community was on full display when the Cookstwon team members held a ‘Name the Calf Competition’.

“We opened it to all the students in the school. The response received has been tremendous. When all the money donated was counted we were able to donate £330 to Air Ambulance NI,” Ben confirmed.

“Every update on the progress of the calves has been posted on social media. This activity has generated several hundred followers from countries all over the world.

For the record, the most popular calf names of the day were: Missy, Bear, Angus, Reginald and Lottie.

Team members were particularly keen to promote their work to a wider audience. So they took a stand at the Clogher Valley Show, serving tasty samples of Aberdeen Angus steak to passers-by.

A key aspect of the ABP Angus Youth Challenge is the personal development opportunities available to all students who participate.

And Robyn Stewart is quick to confirm the advantage, as far as Ben, John-Mark and William are concerned:

“First of all, the competition has greatly improved their level of self-confidence. Its format also offers unique opportunities for participants to improve their interview and presentation skills. »

Getting to the final stages of the competition also allowed members of the Cookstown team to travel. Their itinerary included a visit to Belgium, which took place in June this year.

Ben, John-Mark and William were joined by their fellow finalists from other schools on the trip.

While in Belgium, members of the Cookstown team presented their ideas on agricultural sustainability to representatives of the following organisations: Farmers’ Union of Flanders; ABP Belgium, the Northern Ireland Executive Office and Invest NI plus the UK National Farmers Union.

“Sustainable agriculture: serving the community” was the main theme of the final project submitted by Ben, John-Mark and William.

The three boys are passionate about agriculture. In preparing their final submission, they wanted to bridge the knowledge gap between farmers who raise high-quality grass-fed cattle and consumer understanding of sustainable beef production.

Courtesy of their final report, they were also keen to point out that four million people in the UK are employed in agriculture and the context of greenhouse gas emissions from agriculture compared to d other sectors.

During their project, they were able to demonstrate an “almost zero” approach to waste management: all the fertilizer needs of their host farm were met by the cattle and pig manure produced in this company. Waste and leftover silage was sold to a nearby anaerobic digestion unit to be turned into biomethane.

Essentially, participating teams must demonstrate a unique blend of business acumen, innovation and flair while having the chance to work with Aberdeen-Angus cattle.

ABP Managing Director for Northern Ireland, George Mullan, commented: “This competition challenges young minds to find out the facts about beef production for themselves.

“It gives them the chance to learn about and actively enjoy Angus beef farming and develop the skills needed to work in our industry.

“I am delighted to see that recognition continues to grow for the beneficial influence and impact the Challenge has on a wide range of young people and for the positive profile it offers to agriculture as a subject or a choice. careers. »

This year the spotlight shines on Co Tyrone and the terrific entry compiled by Ben Smyton, John-Mark McCrea and William Hamilton.

No doubt the Cookstown High School trio will inspire their school’s newest grade 11 students and other teens nationwide to emulate their success.

The comments from the panel that interviewed the Cookstown team about their final report capture the very essence of what Ben, John-Mark and William set out to do almost two years ago today.

They said: “Agriculture and food production are in good hands with these three young men. They have shown maturity and leadership well beyond their years.

“In their project and through a very successful use of social media, they were able to eloquently express how their passion for agriculture is combined with a genuine respect for the environmental concerns of society.

“They supported their firm belief that agriculture is part of the solution to climate change by presenting a positive manifesto for agriculture with commitment and zeal. 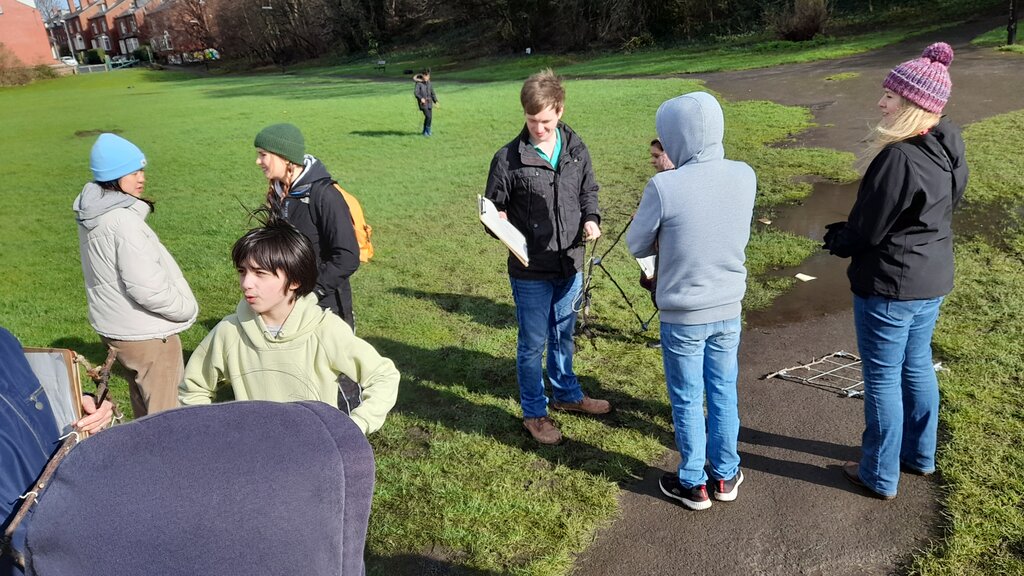